In recent weeks, the distribution center has been loaded with the more than 11,000 different items that are supplied from this DC. This process took about a month and a half. After careful testing, the NDC is now ready to supply the first stores. “We made the first plans for this new NDC four years ago. And now the time has come! The commissioning of the distribution center is a huge step for Jumbo, after years of preparation. We have tested a lot to make the go-live as smooth as possible. We are confident that it will work out ”, says Karel de Jong, Supply Chain Director of Jumbo Supermarkten.

Successful growth
“This new distribution center contributes to Jumbo’s successful growth,” De Jong continues. We are working on a further increase in the number of regular stores, Food markets and Jumbo Cities and we are also working hard in Belgium. In addition, our range is constantly expanding. The number of articles in this category of products with a longer shelf life is expected to increase to over 16,000 items in the coming years. Via this NDC our large range will find its way to all Jumbo customers. To keep this growth on the right track, the NDC is committed to a faster and more efficient supply of products with a longer shelf life. We are now also investigating the possibilities for a mechanized NDC in Nieuwegein for the national distribution of some of the fresh products. ”

Most sustainably designed building in the world
Da Vinci Vastgoed has realized for Jumbo the highest possible BREEAM OUTSTANDING designcertificate for the new building in Nieuwegein, making the building the most sustainably designed building in the world according to BREEAM. To qualify for this sustainability label, Jumbo made as much use as possible of sustainable and energy-saving building materials and lighting. In addition, the new building is equipped with some 13,500 solar panels and an installation that provides so much heat that no traditional heating is required. Rainwater is also collected and re-used. The exterior and surroundings of the building are ecologically designed, including bee nests and special shell trays, nesting nests and a nest wall for birds. The central location of Nieuwegein also means that the distances to the shops and the regional distribution centers will be relatively lower than was the case until now. This of course also contributes to the reduction of CO2 emissions. The sustainability aspects are part of Jumbo’s sustainability plans for climate-aware and future-proof construction and distribution.

Mechanization system
The distribution center, which is located on a site of more than 200,000 m2 in the De Liesbosch industrial estate, will initially have a size of approximately 45,000 m2. The originally German automation company Witron has supplied a complete mechanization system that is unique in the Netherlands in this size. Parts of the system have already been used by various retail companies worldwide. Nieuwegein has fully automatic systems that move pallets to so-called storage locations. The mechanization system consists of three subsystems in which the order is picked manually or mechanically, depending on the article characteristics. The Order Picking Machine (OPM) ensures that about 75% of the items are placed mechanically on the roll container. In the Dynamic Picking System (DPS), crates are picked using a Pick by Light system and also automatically placed in a roll container. The other items are collected manually. The biggest advantages of this are that the roll containers are filled as efficiently as possible, which reduces the number of transport movements. In addition, the order in which the roll container is stacked is in line with the way in which the products are on the shelves in the shops. This makes it easier to process the products and make them available to the customer more quickly.

Distribution hotspot Nieuwegein
“We are delighted that Jumbo has chosen Nieuwegein as the location for their innovative, national distribution center. It underlines the attractiveness of Nieuwegein as an important national distribution hotspot and gives an absolute quality impulse to the De Liesbosch industrial estate”, says Ellie Eggengoor, alderman for Economic Affairs and Mobility of the municipality of Nieuwegein. “Because it is the most sustainably designed distribution center in the world, a good step is taken in our ambitions to make our city a sustainable city. We hope that the employees will enjoy working in and from Nieuwegein. ” 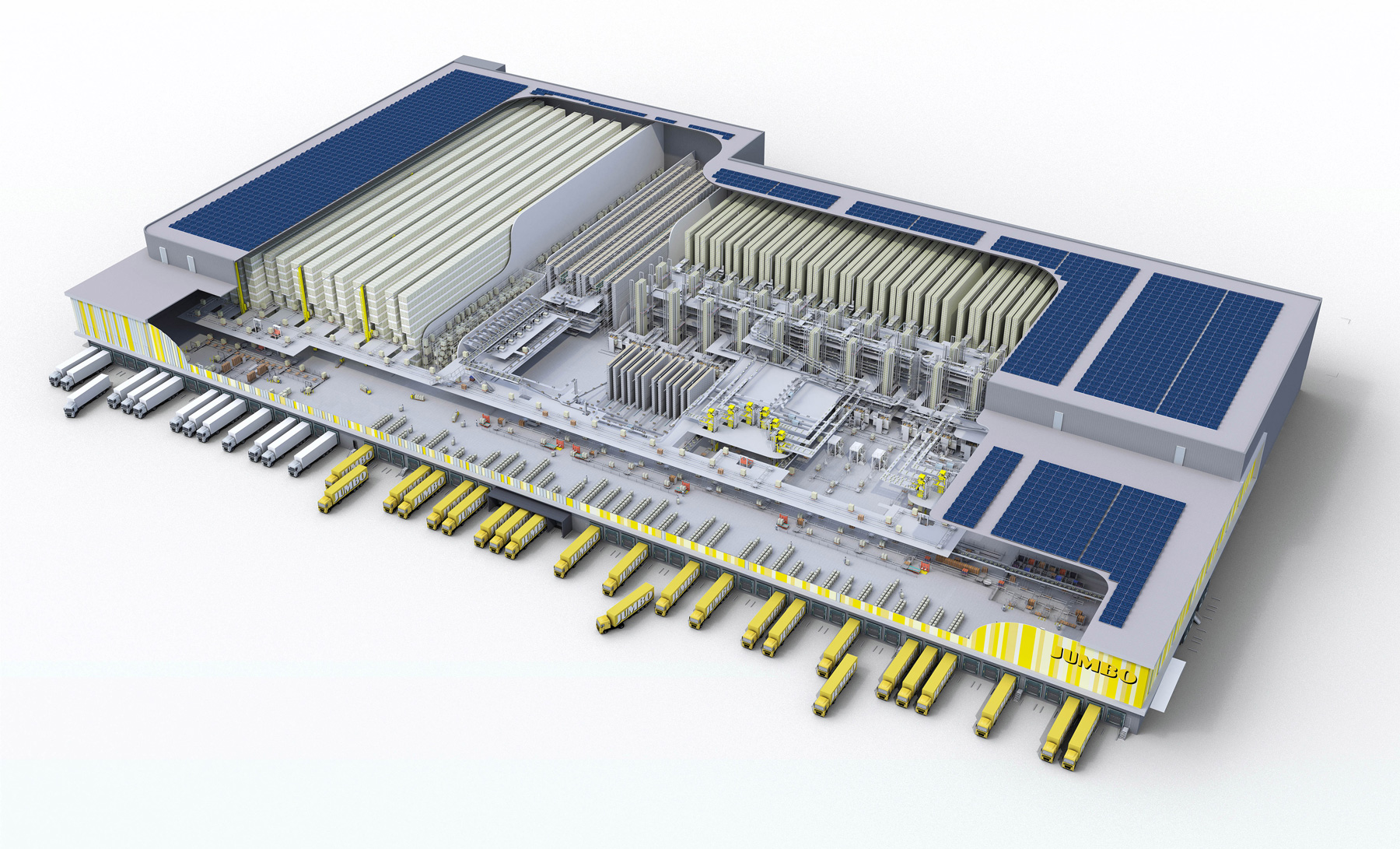 The layout of the national distribution center of Jumbo in Nieuwegein. Design and projectmanagement Da Vinci Vastgoed, architect Dik Verhaar.